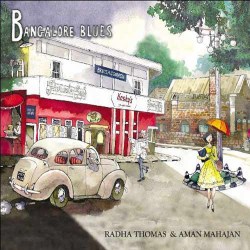 Listen / buy here
Let’s start with the banality: musical contacts along the line “West – East” are a two-way street. Another question is that we are better aware of European and American musicians who were attracted, say, by Indian culture – from Yehudi Menuhin to George Harrison, John McLaughlin and so on. But about the Indians, keen on the same jazz, we know much less. I do not mean those children of Indian emigrants who were already born in the West and today have become prominent figures of the jazz elite, like Vijay Ayer or Rudresh Mahanthappa, but I’m talking about indigenous Indians working in jazz. Among them are the creators of the Bangalore Blues album presented here, Radha Thomas and Aman Mahajan.

Radha Thomas (and then Radha Shottam) started in one of the most popular rock ensemble Human Bondage in India in the 70s, but then forever gave her heart to jazz. After moving to New York, she performed on the world’s largest jazz scene for almost 20 years, including with people such as Michael Brecker, John Scofield, John Abercrombie, and also participated in many American, European and, of course, Indian jazz festivals. She continues to actively engage in jazz in her homeland: she gives concerts, records, conducts her own radio shows in Bangalore, and also writes books on various topics. Her partner in the project, pianist and composer Aman Mahajan, also lives in Bangalore and is part of Radha-led Radha Thomas Ensemble. In addition, he has several more projects, including the solo Refuge.

Bangalore Blues is a small-sized chamber project that Radha and Aman did in a duet. The co-authors wrote seven compositions of this album together, and Radha composed the lyrics of all the songs. Once she began her musical education with Indian classical music, which she did not forget about, carried away by jazz. That is why in her songs, a purely jazz improvisational beginning is often combined with some impregnations of a traditional Indian character that are not obvious to us, but quite understandable to professionals and connoisseurs of Indian music. We, non-experts, can only feel some interesting piquancy in the presentation of the material. Radha sings mainly about various everyday and personal problems, including the problems of Bangalore. But they end the Radha album with Aman with a song that gave the name to the whole album: Bangalore Blues – about