If nothing else, Bengalureans resort to humour in the face of the crumbling infrastructure. Bengalurean jazz singer Radha Thomas and pianist Aman Mahajan however, wrote the song Load-shedding as an ode to the power cuts in the city. This, along with six other tracks, are included in the album Bangalore Blues which is set to be released online, on March 15th. “If you see the video (it has been shot entirely in candlelight), you will completely empathize with it,” Thomas says about the song. For the album, she has collaborated with musician and Berklee alumnus Aman Mahajan who has accompanied her on the piano.

Bangalore Blues, as the name suggests, has an intense connection to the city with both Thomas and Mahajan hailing from here. Thomas, a trained Hindustani classical singer, is a jazz vocalist and has performed with American jazz musicians like Joe Farrell and John Scofield during her 20-year stint in New York City. She has performed with Indian musicians as well, including Louis Banks and Sanjay Divecha. But she is best known in the city as the frontwoman of UNK: The Radha Thomas Ensemble which features Mahajan on the piano or keyboard.

“But for this album, which has a pure sound, we needed a real grand piano in the studio. Aman is a purist and doesn’t like playing on electronic keyboards unless he is forced. So, we had to go to a studio in Mumbai which had a beautiful piano. It was wonderful but bit expensive,” she laughs, commenting on the two-day recording experience at the Island City Studios in Mumbai. 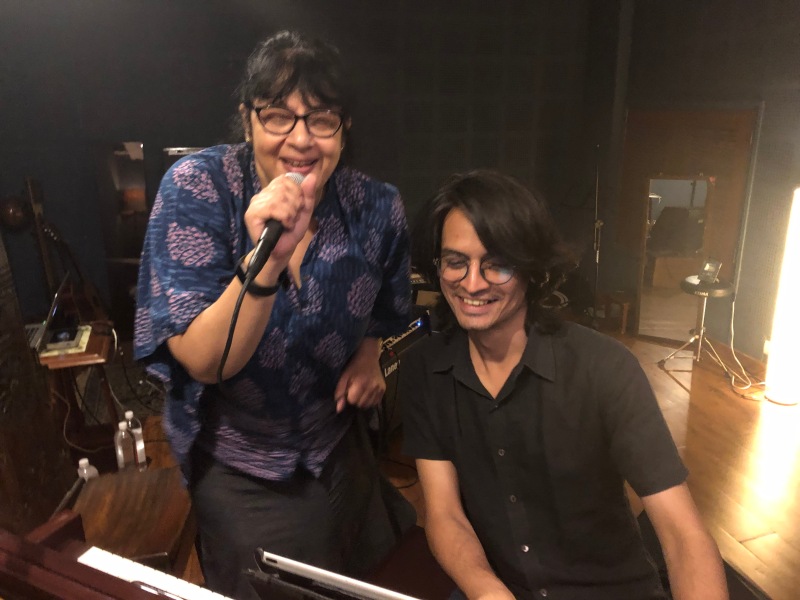 “He is my son’s age,” she likes to say, have played together ever since she first watched him play the piano in a Youtube video a decade ago. “Isn’t it odd?” she asks. “He lived just a few streets away from my house.” The duo has been performing live since then and have written about 30 songs together. Although there is a big age gap between them, Thomas calls Mahajan her peer when it comes to music. “In fact, in many ways I have learnt from him just as he has learnt from me.” According to her, playing music together has helped in their collective knowledge and understanding of music.

In the album, which Mahajan describes as “a completely stripped-down piano and voice duet”, there are a few compositions by Mahajan – Leifmotif and Load Shedding – to which Thomas has written the lyrics. Bangalore Blues was a song that Thomas had written in New York City during the 70s when she longed for Bengaluru’s jacaranda trees. An added incentive to the title track is that the video has used the artworks of Paul Fernandes, who is a well-known and humourous chronicler of the city. His artworks of iconic locations such as the Bangalore Club, Cubbon Park and Ulsoor Lake create the perfect backdrop for this purely nostalgic song. Some tracks have Indian melodic influences with mridungam korvai and ragas making appearances.

While both the musicians have performed with other musicians, Thomas says, “I don’t like performing without him. He is talented and intuitive. I have got so used to him.”

This is the kind of launch we like when Bengaluru is in partial lockdown. This happens online, you’re not going to miss it.

Bangalore Blues will be released at