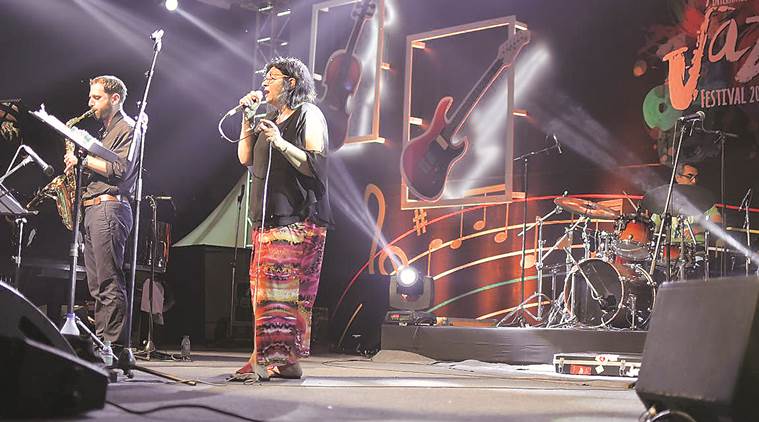 Radha Thomas, one of India’s well-known jazz musicians, on her first love, doing a Bob Marley redux, and singing to dhrupad taal

She’s authored three books, hosted a radio show, held a senior position in a media publication house, and travelled the globe performing jazz music. Bangalore-based Radha Thomas has donned far too many hats, but she has no doubt about what her first love is: jazz. A pioneer in the Indian jazz circuit, Thomas’s first major break came in the early ‘70s when she joined Human Bondage, one of India’s most popular rock ‘n’ roll bands, as a lead singer. She was 16. Thomas was in Delhi for the International Jazz Fest, which concluded yesterday.

After three years of being with Human Bondage, Thomas decided to move to New York to pursue a career in jazz singing. “I can’t believe they let me do that. I come from a very orthodox Tamil Brahmin family. In the ‘70s, it was all about ‘naal paer inna solluvanaga’ (What will people say ?),” she says. Thomas, 62, was born in Tamil Nadu and spent her early years in a boarding school in Panchgani, Maharashtra. Later she moved to Delhi to pursue higher studies at Lady Shri Ram’s. In New York, Thomas played at the best jazz clubs and collaborated with top artists including Ryo Kawasaki, a Japanese fusion guitarist, and Frank Tusa, a bassist and composer. After nearly two decades in the US, she returned to India in 1993 and started performing with the best musicians in the country.

On the second day of the festival at the lush green Nehru Park, her band, UNK: The Radha Thomas Ensemble, gave the crowd a taste of their unique Indian style jazz. Thomas, a trained dhrupad singer, was at complete ease, swaying to the groovy music and doing what she does best — singing jazz songs. The band was formed in 2009 and are regulars at various music fests including Jazz Yatra. With Ramjee Chandran on the guitars, Aman Mahajan holding the melody on the Keys, Mishko M’Ba on the bass, Matt Littlewood on the saxophone and Rahul Gopal on the drums, the band is a complete package.They performed about four songs, including Bangalore Blues, a tribute to the city and Tumble, a song where Thomas’s Hindustani background is distinct. “When I studied dhrupad, I knew I liked its rhythmic style. It is a form of music which unlike the other disciplines forms does not have a lot of gamakas. But jazz is my first love and I also love rock ‘n’ roll.”

Having performed for almost four decades now, Thomas has closely observed the changing trends in music. “ The biggest difference is that we used to have lot more work. We would be booked by a club for six months straight, for playing jazz. But now you have to trudge around and you get that odd gig.” Thomas is currently working on a song on street dogs, and is also trying to improve her gym attendance. She and Littlewood are planning to record with some jazz musicians in Pondicherry. Before concluding the interview, it was only apt to ask her what she had for breakfast. “Not dosai.”