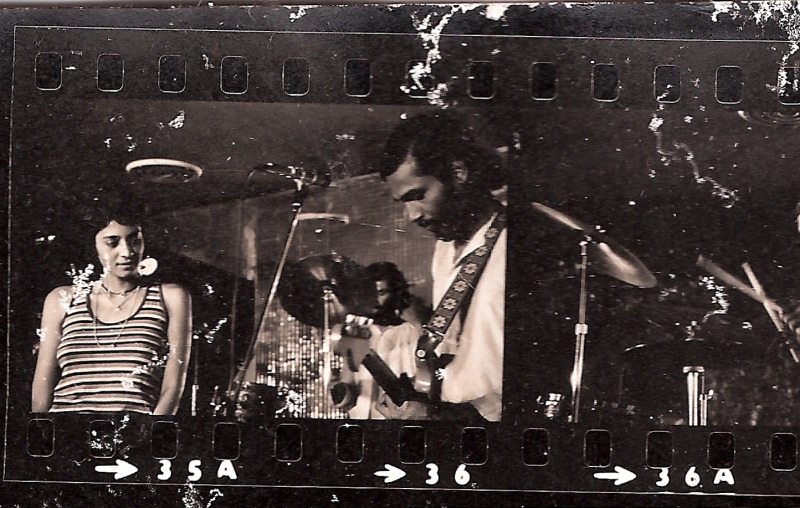 It was the late seventies in India, and much like a rolling stone, the rock movement in the country was swiftly gathering momentum. A young teenage girl by the name of Radha Thomas was about to see her wildest fantasy become a reality – little did she know that she would soon be singing in a rock n’ roll band. The band was Human Bondage – one of the most popular bands on the scene at the time – also considered early pioneers of the raga rock movement. It was founded in Bombay by brothers Ramesh Shotham (a percussionist) and Suresh Shotham (lead guitarist and composer for the band). “There were these handsome, cool guys in India’s most popular band and they all had really long hair and weird clothes and they wanted me to sing”,  says Radha, “It couldn’t have been better for a teenage girl”.

This would sow the seeds for Radha’s lifelong musical journey – before she knew it, Radha was flying off to Warsaw, Poland, to represent India at a Jazz festival. She would go on to develop a passion for Jazz music, moving to New York City and performing at jazz festivals and venues all around the country and the world, collaborating with renowned jazz musicians from across the globe. Today, she is the Executive Vice President of media publishing house Explocity, a prolific writer, and an eternal songstress. How did it all begin? That’s what I wanted to know more about.

Nirupama: How did you first find yourself in the world of music?
Radha: I was born into a world of music I suppose. There has always been music around me. My mother was always singing or playing records or something and I got a guitar when I was about twelve I think. So my world’s always been filled with music.

Nirupama: Tell me a bit about your days with Human Bondage? About the band and its original material?
Radha: The Human Bondage was a like a fabulous dream come true for me at least. There were these handsome, cool guys in India’s most popular band and they all had really long hair and weird clothes and they wanted me to sing. It couldn’t have been better for a teenage girl. Truly. Oh yeah, the music was pretty cool too. Suresh Shotham, wrote tunes and I’d write lyrics. We worked on a lot of tunes, some of which I sing till today.

Nirupama: What was the independent music scene in India like in those days?
Radha: I don’t know much about the ‘scene’ – as I said, I was just about sixteen or seventeen. All I knew is that we played gigs every night in some fantastic clubs, all around the country and people packed the place every night. I guess the scene was focused on the clubs because you didn’t have the internet. So it was a good thing.

Nirupama: Can you tell me a bit about UNK: The Radha Thomas Ensemble?
Radha: UNK is my own project but I would like to share the spotlight especially with Aman Mahajan, the keyboard player who sees inside my head very clearly. We’ve composed many, many songs together and continue to do so. We released one album last year and either by the end of this year or early next year, I’m hoping to put out album two. The first one was well received both in India and abroad. So there’s something to look forward to. The band is closing on four years now, the same musicians Mishko M’Ba (amazing bass player), Matt Littlewood (who can move me to tears with his saxophone), Jeo George (who is the newest member of the band, the drummer… a dynamite, dedicated and superb musician) and Ramjee Chandran, who is passionate about jazz.

Nirupama: Can you tell me a bit about any other musical projects you’re currently involved in?
Radha: Well, there’s this new project I’m working on.  It’s called NY International and features Tony Cimorosi (Bass, USA), Frank Colon (percussion, Brazil), Koko Bermejo (Drums, Philippines) and Aman Mahajan (Keys, India) and me. Our music has been done exclusively through online interaction. Except for Aman who lives around the corner, we haven’t met each other physically even once throughout the recording process, and the result is a unique blend of musical cultures and disciplines.
We’re in the middle of recording our first album and we hope to tour as soon as the album is done.

Nirupama: How does your Hindustani training influence your approach to jazz music?
Radha: The influence of Dhrupad is inextricable from the jazz / blues and other types of music I sing. So are a lot of other influences. It’s who I am. I think as Indians with a multicultural sort of heritage and upbringing, it’s inevitable that we’re not one thing or another. But a little of everything.

Nirupama: As a member of the media and according to you – what is the role of the media in India’s independent music scene?
Radha: It’s hard to look at myself as a member of the media when I’m wearing my musician’s hat. I chew my nails as anxiously as the next person, waiting for a good review when I’m singing. I think as a rule, if those who come to review music have some idea about the nuances of a particular genre, then the quality of the music produced will only get better. But as it is, it’s not uncommon to have the fashion or food correspondent write a review. I know. Tragic. I personally don’t review other people’s music, although I suppose in my company I’m qualified to do so. Never know when I may need that drummer or bass player I’ve just trashed! (I’m only kidding. This is a joke. I love everyone).

Nirupama: According to you – how can the media successfully develop /impact the Indian independent music scene today?
Radha: It’s not so much the media as the audience that one can thank for any kind of impact Indian bands can have on the music scene outside of films. I don’t think the media has all that much influence over taste. However, getting media attention can only help getting the word out. But eventually, thanks to the digital universe we live in, everyone has an equal shot… reviewers be damned! Public opinion is where it’s at. The hits / the misses.

Nirupama: How does today’s independent music scene compare, to the days when you sang with The Human Bondage?
Radha: There’s no comparison. People were imprisoned in an analog world where live music meant everything. It’s not the case today. So it’s much harder to be successful today.

Nirupama: What is the way forward – for what you see as the ideal relationship between the media, and independent musicians/artists?
Radha: I’d say honesty, originality, luck and lots of money. If the artist has all this, he can make everyone happy!

Nirupama: What’s in store for your future musical projects?
Radha: Who knows honestly. I hope war isn’t declared on Syria. I hope the Rupee doesn’t keep sinking. I hope people still have good jobs. I hope the police/politicians don’t use entertainment to show their muscle. If all these things are in place like they are in a developed country, the future looks great!